Does principal turnover correlate with a school's socio-economic status?

Why is this question important? A critical feature of an effective education system is equity of resources and outcomes across schools, regardless of student demographics. One of the most important student demographic measures is student socio-economic status (SES). Schools can be identified as higher or lower SES schools by the percentage of students who qualify for the National School Lunch Program (also referred to as the free or reduced-price lunch program, or FRLP). Children may qualify for either free or reduced-price lunch based on family income; free lunch eligibility represents the lowest income families.

School principals are the second most important school-related resource, after teachers, in influencing student performance, accounting for about a quarter of total school effects (Marzano, Waters, & McNulty, 2005). There is increasingly clear evidence as to which practices of principals are associated with teaching effectiveness, student achievement, and high-performing schools (Robinson, Lloyd, & Rowe, 2008). Research suggests that the turnover rate among principals can have a significant impact on the quality of school performance. It can lead to greater teacher turnover (Béteille, Kalogrides, & Loeb, 2012), have a direct negative effect on student and school achievement (Burkhauser, Gates, Hamilton, & Ikemoto, 2012), and prevent large-scale change efforts that require approximately 5 years of leadership continuity (Seashore Louis, Leithwood, Wahlstrom, & Anderson, 2010). Additionally, principals in lower SES schools tend to have a greater impact on student performance than principals at higher SES schools (Leithwood, Seashore Louis, Anderson, & Wahlstrom, 2004; Seashore Louis et al., 2010). Given the importance of this issue, tracking principal turnover in the context of a school's SES is valuable in identifying trends, ascertaining where turnover is the greatest, and providing a baseline metric for change efforts. 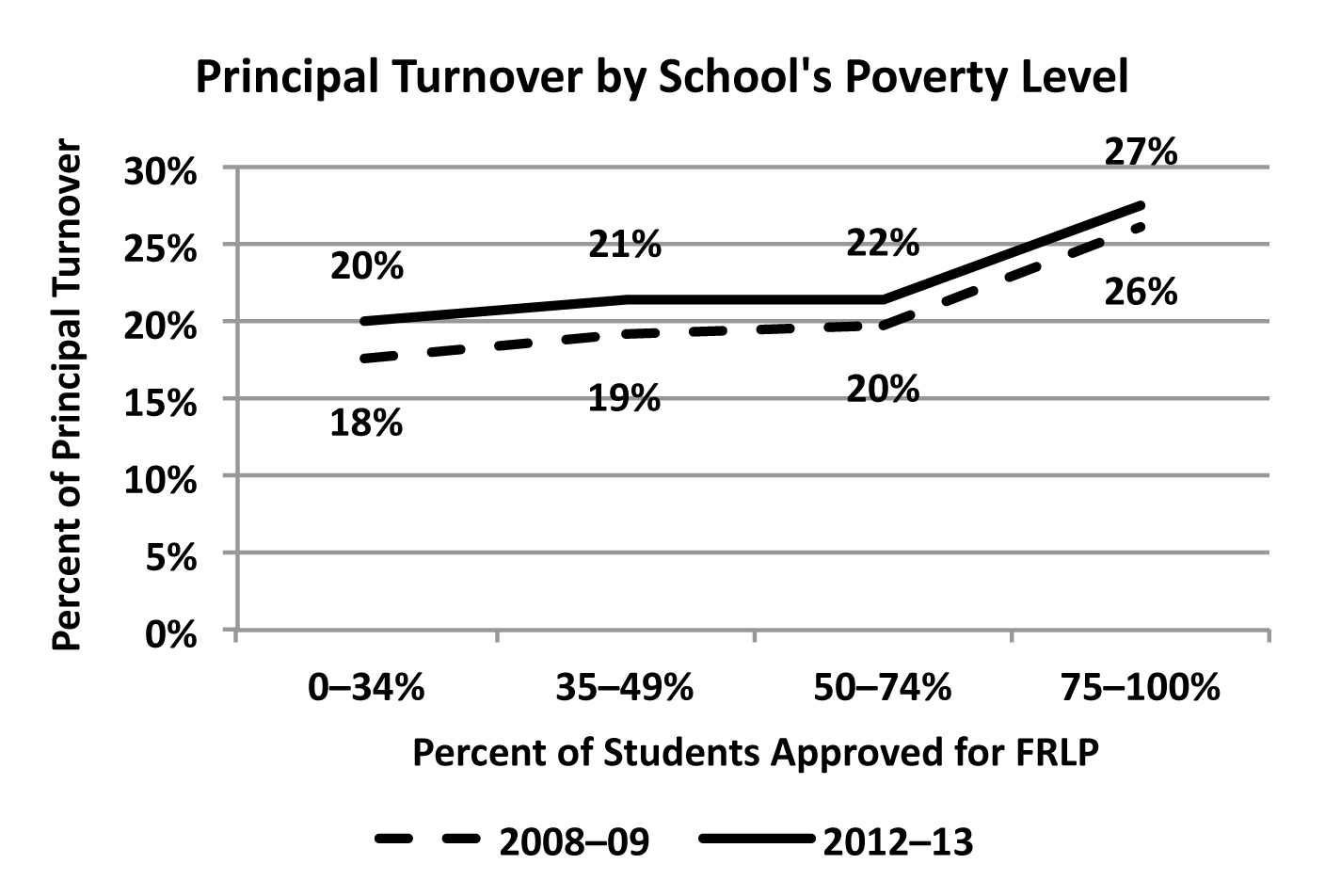 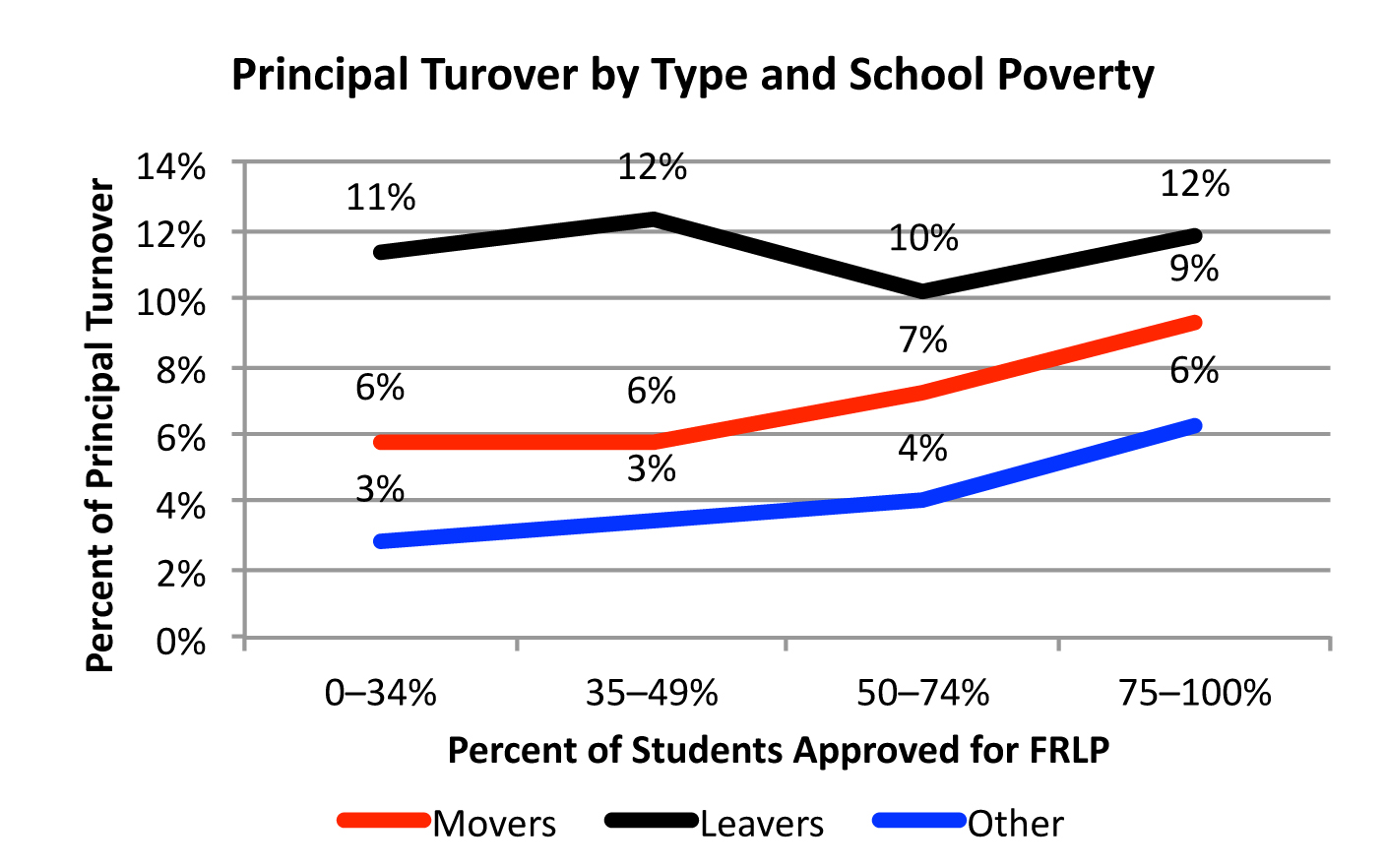 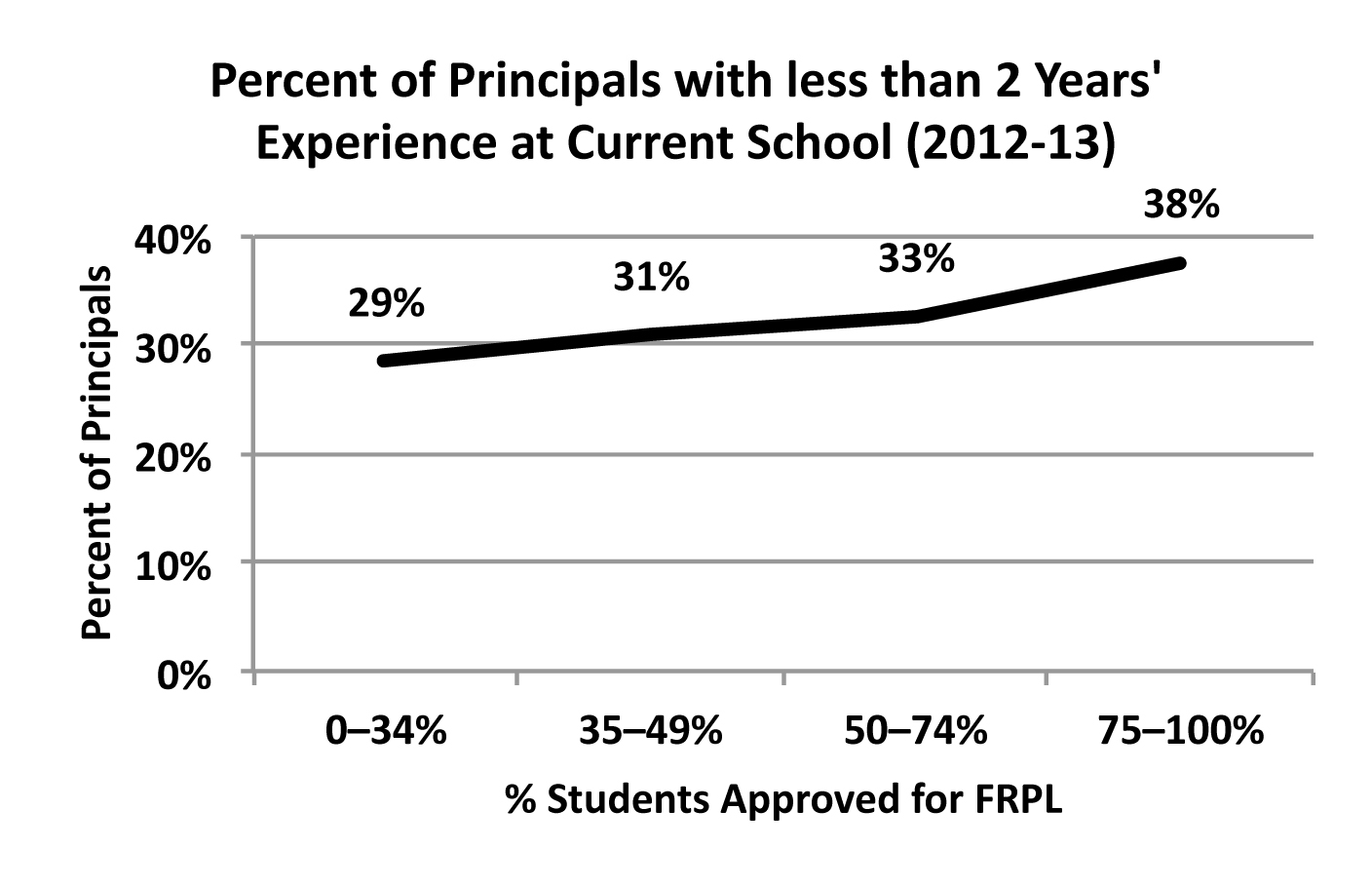 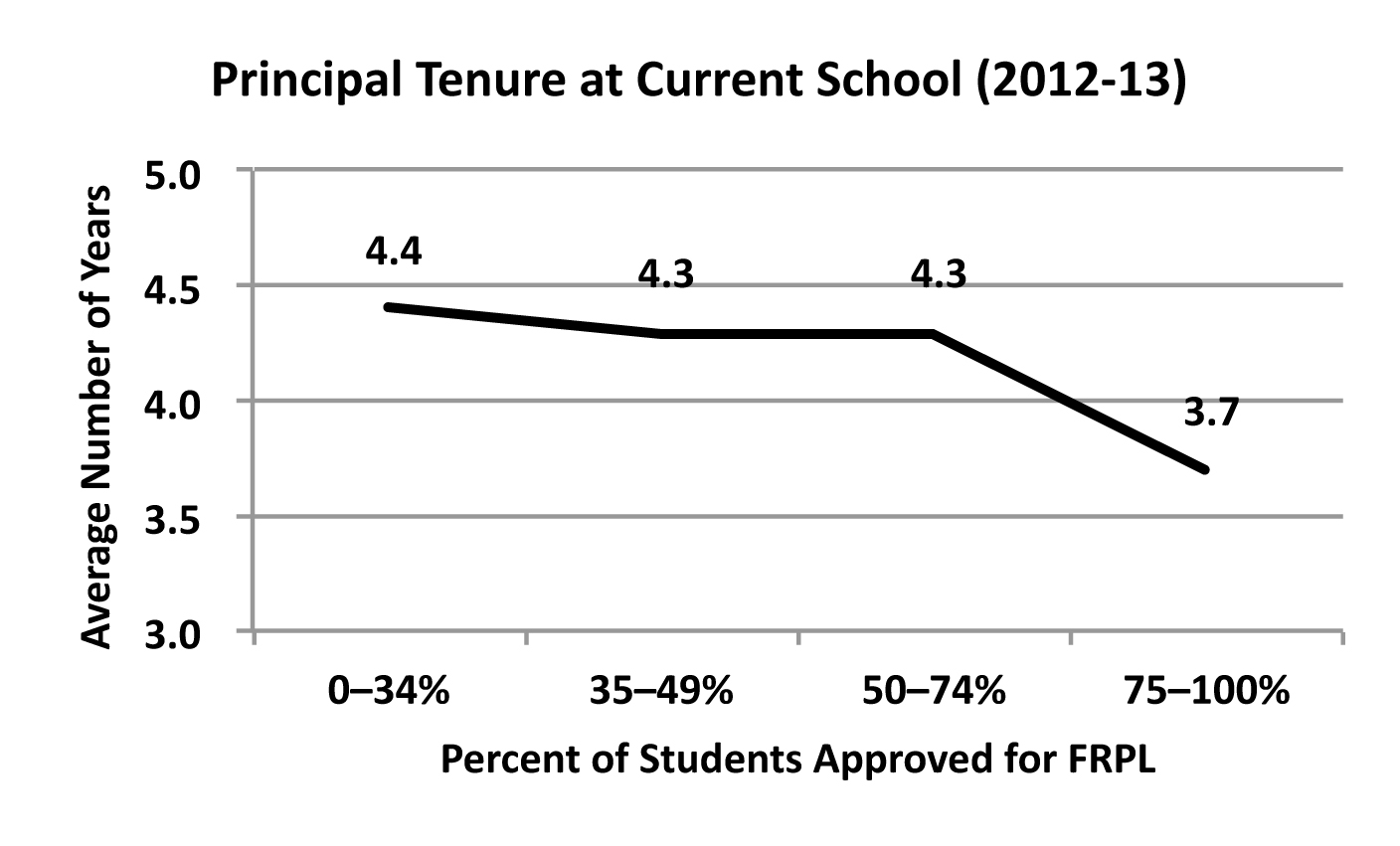 The average tenure of school principals at their current schools, also for the 2012–13 school year, was similarly influenced by the percentage of students qualifying for FRPL. It ranged from 4.4 years in high SES schools to 3.7 years in low SES schools.

Overall turnover increased only slightly from the 2008–09 school year to the 2012–13 school year, and the tendency of turnover to increase with lower SES schools remained consistent.

Implications: Schools with lower SES students are often the lowest performing schools overall. There is a great need for consistent, effective school leadership to turn such schools around. The data suggest that the current system for selection, development, and support of school principals is failing these schools. Changes to the system are imperative when the principal turnover rate and duration of time at a given school are directly related to the percentage of students qualifying for FRLP.

Study Description: The 2012–13 Principal Follow-up Survey (PFS) is a component of the Schools and Staffing Survey (SASS), a nationally representative sample survey of public and private K–12 schools, principals, and teachers in the 50 states and District of Columbia. The purpose of the SASS is to collect information that can provide a detailed picture of U.S. elementary and secondary schools and their staff. It was developed by the National Center for Education Statistics (NCES) of the Institute of Education Sciences within the U.S. Department of Education and was conducted by the U.S. Census Bureau.

The SASS covers a wide range of topics including teacher demand, teacher and principal characteristics, general conditions in schools, principals' and teachers' perceptions of school climate and problems in their schools, teacher compensation, district hiring and retention practices, and basic characteristics of the student population.

*study from which graph data were derived