How long have school principals typically been employed as principals in their current schools?

Why is this question important? School principals are the second most important school-related factor, after teachers, in influencing student performance, accounting for about a quarter of total school effects (Marzano, Waters, & McNulty, 2005). There is increasingly clear evidence as to which practices of principals are associated with teaching effectiveness, student achievement, and high-performing schools (Robinson, Lloyd, & Rowe, 2008). Research suggests that the turnover rate among principals can have a significant impact on the quality of school performance. It can lead to greater teacher turnover (Béteille, Kalogrides, & Loeb, 2012), have a direct negative effect on student and school achievement (Burkhauser, Gates, Hamilton, & Ikemoto, 2012), and prevent large-scale change efforts that require approximately 5 years of leadership continuity (Seashore Louis, Leithwood, Wahlstrom, & Anderson, 2010). Tracking the tenure of school principals at their current schools is a critical metric for understanding the impact that turnover can have on a school's performance. 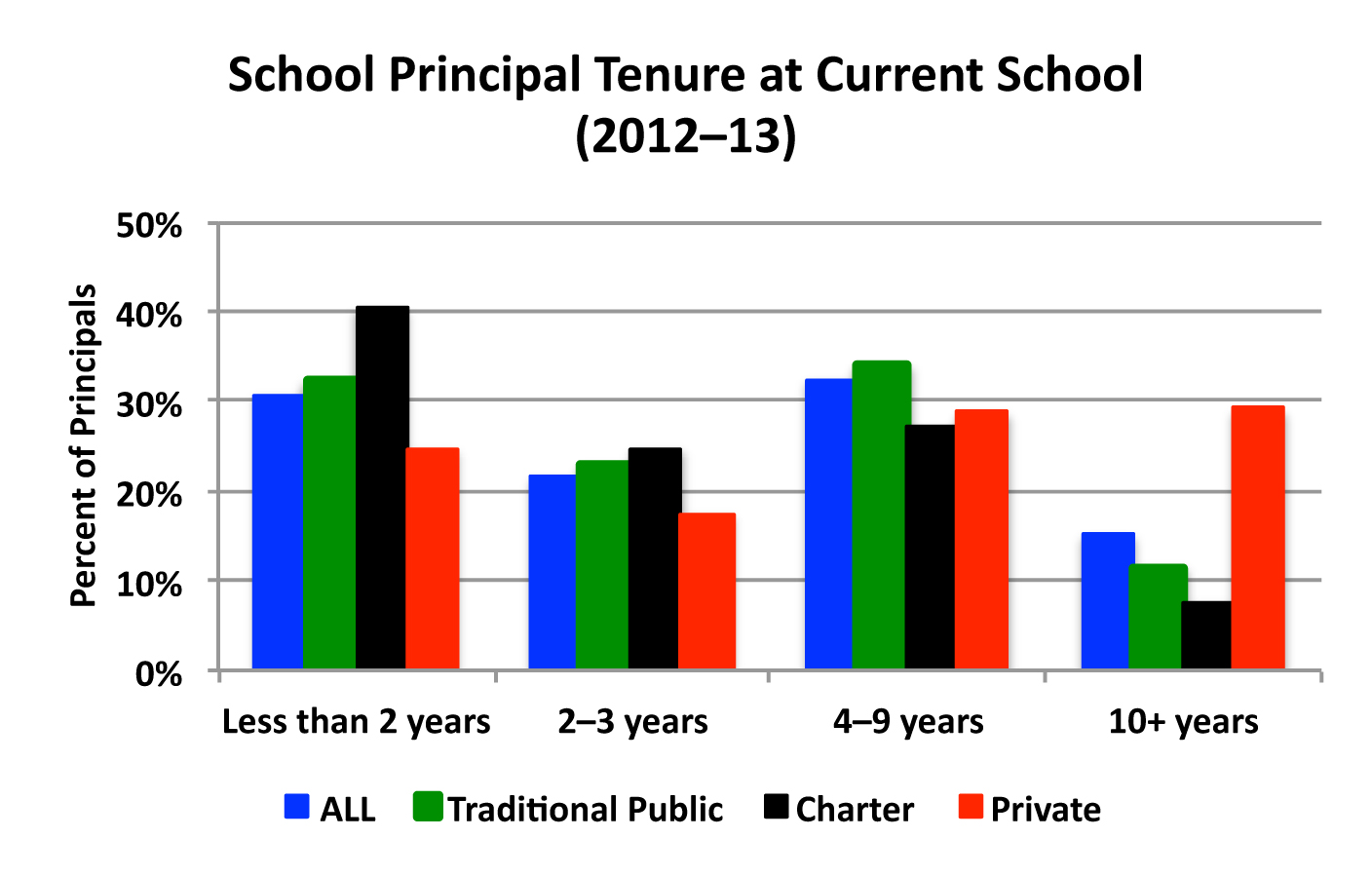 Implications: The data show a significant challenge in developing effective principals and improving schools. The fact that over half of all schools had principals with a maximum of 3 years' tenure at their schools suggests the need for effective interventions for principal retention, on-the-job training, and meaningful support.

Study Description: The 2012–13 Principal Follow-up Survey (PFS) is a component of the Schools and Staffing Survey (SASS), a nationally representative sample survey of public and private K–12 schools, principals, and teachers in the 50 states and District of Columbia. The purpose of the SASS is to collect information that can provide a detailed picture of U.S. elementary and secondary schools and their staff. It was developed by the National Center for Education Statistics (NCES) of the Institute of Education Sciences within the U.S. Department of Education and was conducted by the U.S. Census Bureau.

The SASS covers a wide range of topics including teacher demand, teacher and principal characteristics, general conditions in schools, principals' and teachers' perceptions of school climate and problems in their schools, teacher compensation, district hiring and retention practices, and basic characteristics of the student population.

*study from which graph data were derived