How well are Interventions Implemented in Educational Settings? 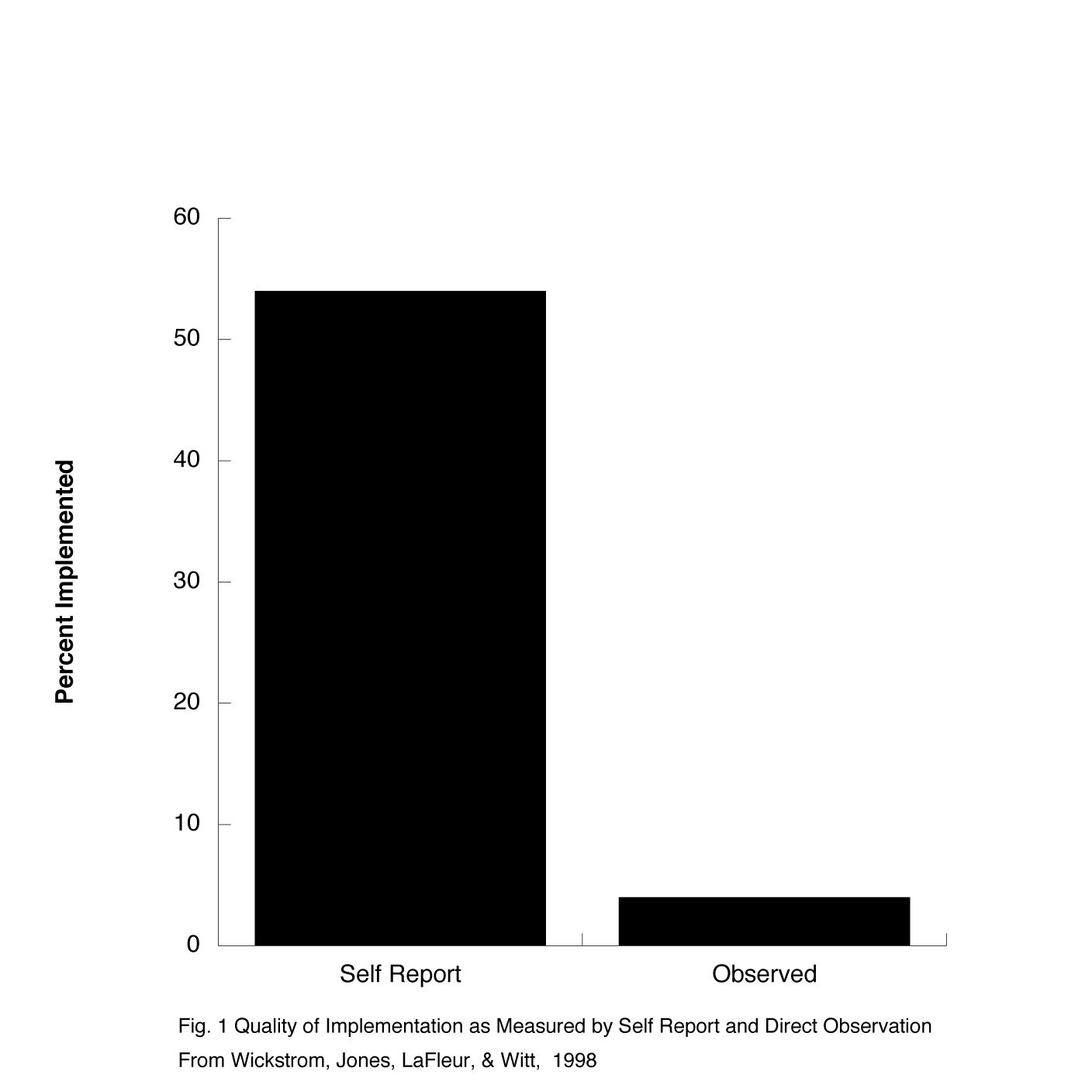 Results: Figure 1 shows the difference between the average level of implementation reported by teachers (54%) and the average level based on independent, direct observation of the teachers implementing the intervention (4%), reported by Wickstrom et al. (1998), Two points are striking about these data. First, the observed level of implementation is only 4%, even though the teachers were trained to 100% accuracy. This is consistent with other data suggesting that training alone is insufficient to ensure effective implementation and that ongoing performance feedback is necessary to maintain adequate levels of intervention implementation (Mortenson & Witt, 1998; Noell, Witt, Gilbertson, Ranier, & Freeland, 1997). 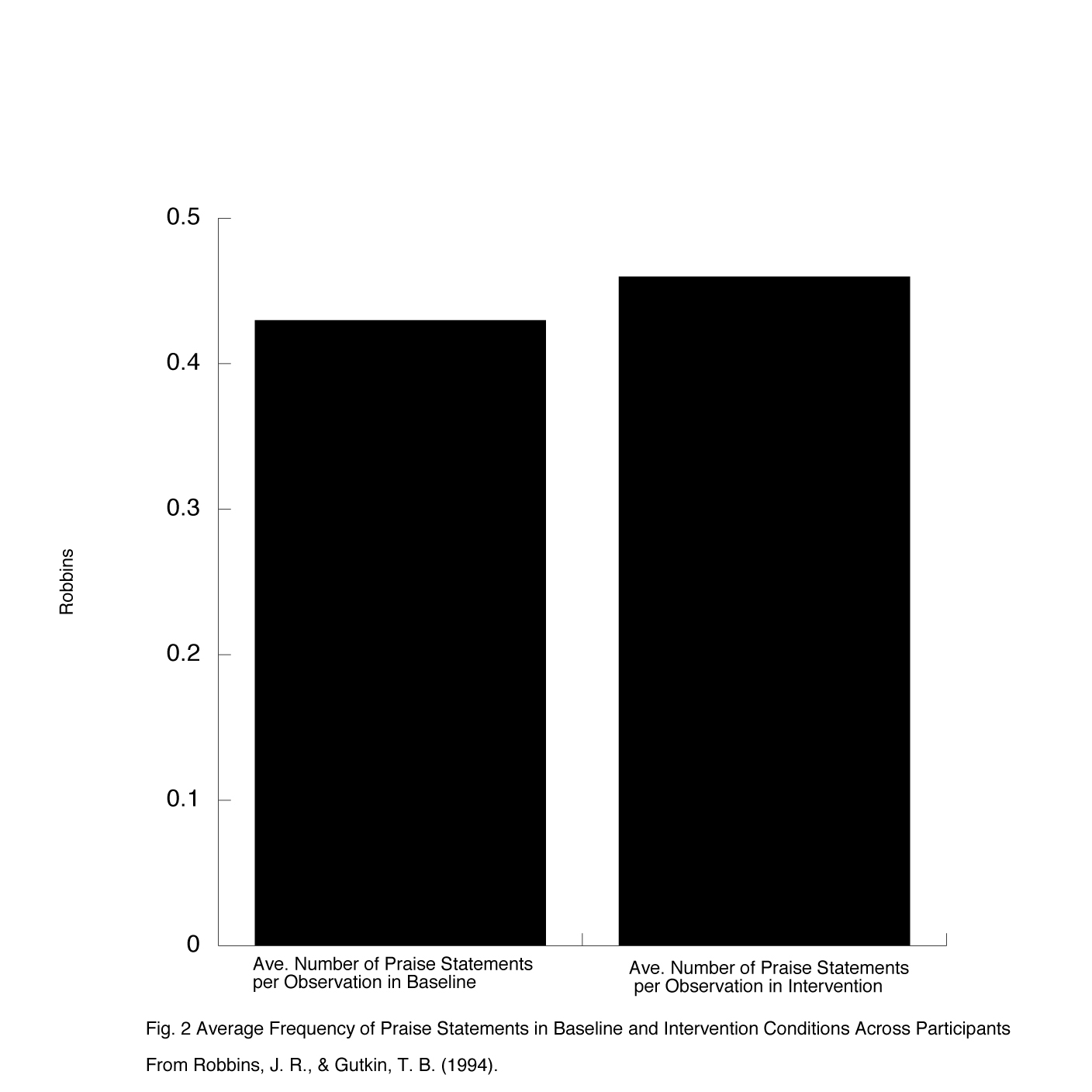 Figure 2 shows the data from the Robbins and Gutkin (1994) study. The data reflect the average frequency of praise statements during 30-minute observations across baseline and intervention conditions. During the baseline phase, the identified student was praised 0.43 times per session during the baseline phase, and 0.46 times per session during the intervention phase. One interesting aspect of this study is that all teachers reported that they had increased the frequency of praising during the intervention phase. This finding is consistent with the data from the Wickstrom et al. (1998) study, which showed that self-reporting was not a reliable method for assessing quality of implementation (Fig. 1). To put the obtained data in perspective, during the baseline phase students were praised approximately one time in three observation sessions. In the intervention phase, they were slightly more likely to be praised but still about once every three sessions. It is very doubtful that changes of such a small magnitude would have any discernable impact on student behavior.

Implications: Taken together, these studies suggest that if empirically supported interventions are to be effective, alternative approaches giving greater weight to the quality of implementation should be developed. Training and instructions alone are insufficient. Not only are the programs likely to be ineffective, but they are implemented at significant cost (purchasing the intervention, training individuals to implement it, and so on). In effect, interventions are never actually implemented so there is no benefit to offset the costs of implementation. This situation is indefensible in a time of scarce financial resources.

Failure to obtain benefit from empirically supported interventions is likely to lead to cynicism that any intervention can be effective. The ultimate cost of failure to implement interventions adequately is that students do not benefit, resulting in lost educational opportunities. Clearly, there are resource costs associated with ensuring that interventions are well implemented, but the prospect of actual benefit offsets those costs. Currently, education is experiencing high cost with limited offsetting benefit. Perhaps it is time to invest in quality implementation.

Study Description: The data for this review come from two separate studies. The first study, by Wickstrom, Jones, LaFleur, and Witt (1998), asked 29 teacher participants either to select a research-based intervention to implement in their classrooms or to have one prescribed by a consultant. The teachers were instructed on how to implement the selected intervention. They self-reported on the accuracy of their implementation. In addition, independent observers measured the accuracy of implementation by the teachers. The second study, by Robbins and Gutkin (1994), measured the frequency of praise statements directed to a student that had been identified as having difficulty attending in class during 30-minute observations prior to intervention (to determine a baseline) and during intervention. During the baseline phase, teachers were observed to determine the frequency of praising. In the intervention phase, teachers were explicitly instructed to increase the frequency of praising.