Is there empirical research to validate the use of prereferral intervention teams (PIT) to reduce special education referrals, achieve gains, or improve student conduct?

Why is this question important? Prereferral intervention team (PIT) models have been widely adopted across the United States over the past 15 years. PIT has been used as a common intervention to better serve children with disabilities as well as general education students in an effort to avoid placing students unnecessarily in special education. PIT has been used in conjunction with Response to Intervention (RtI) as a key component in effective data-based decision making. Because of these facts, it is important to understand the empirical knowledge base supporting PIT as an evidence-based intervention. 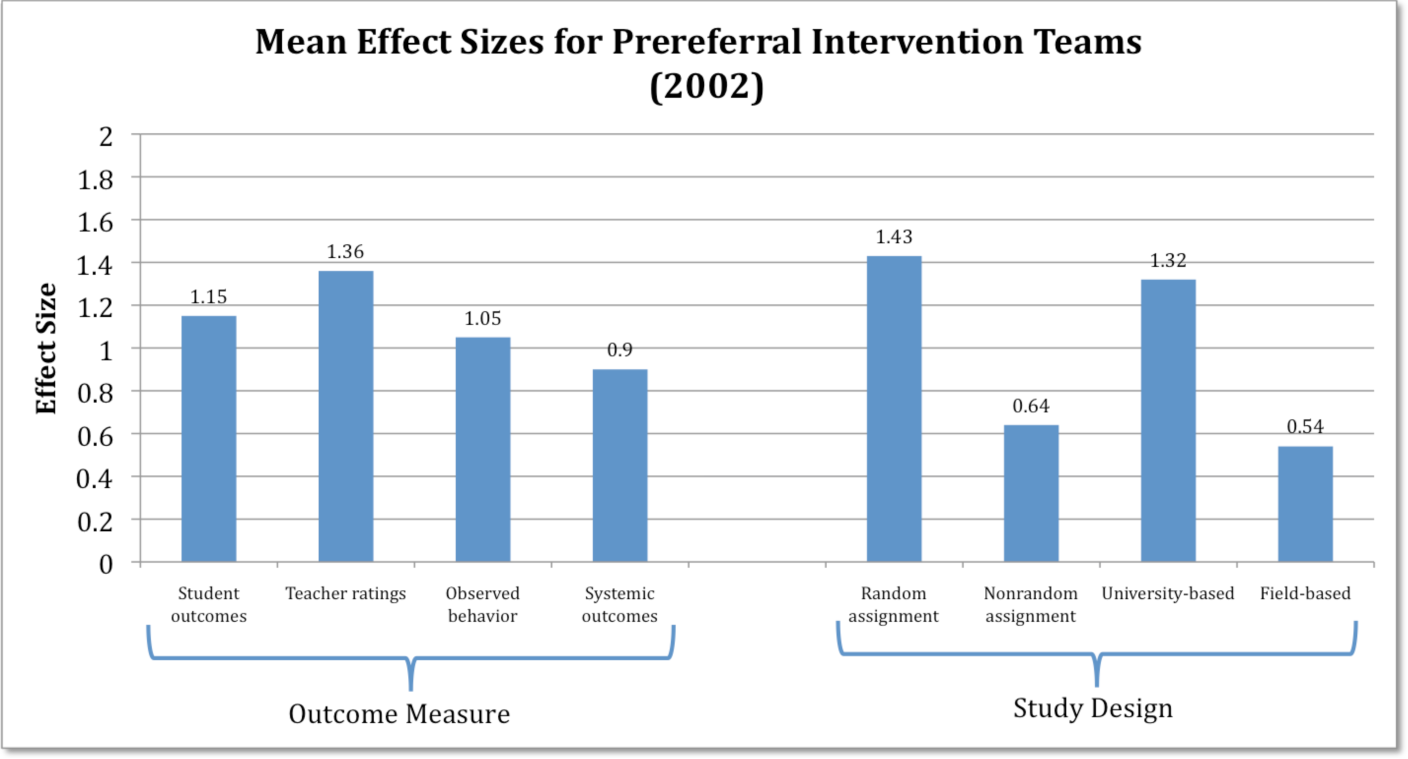 Result(s): The results of the meta-analysis appear striking despite the small number of studies available. Seven of the effect sizes (ES) obtained in the study were at or above 0.90 with the highest being 1.43. Randomized studies had a mean coefficient that was more than twice as large as those that did non-randomized studies. Furthermore, the mean ES for studies that used university-based teams was more than twice as large as the mean ES for those using field-based teams.

Seven of the coefficients fell within Cohen’s (1988) large category and suggested that the PIT has a strong effect on desired outcomes. Although the data suggests that PIT is effective, the data is not available to assess the cost effectiveness of the approach.

Another significant finding was the difference between ES coefficients for university-based (1.32) and field-based (0.54) PIT. The decreased ES from the field may result from a lack of treatment integrity. Carter and Sugai (1989) surveyed 34 state-mandated PIT initiatives and found that all the state efforts left design and implementation to the local districts. Given current knowledge of treatment integrity, critical PIT model variables: format, assignment of staff, and training are likely implemented less effectively in the field.

Study Description: The study was designed as a meta-analysis that presented quantitative data used to compute effect size Means and standard deviations for both experimental and control groups, or pre- and post-implementation or if enough data were provided to compute the necessary means and standard deviations or if statistical analyses provided enough data to compute an effect size. Of the 72 articles originally reviewed, 9 met criteria for inclusion in the meta-analysis.