What percent of Americans graduate from high school?

Why is this question important? A high school education forms the foundation of basic skills needed in society and is the preparation for higher education in college. 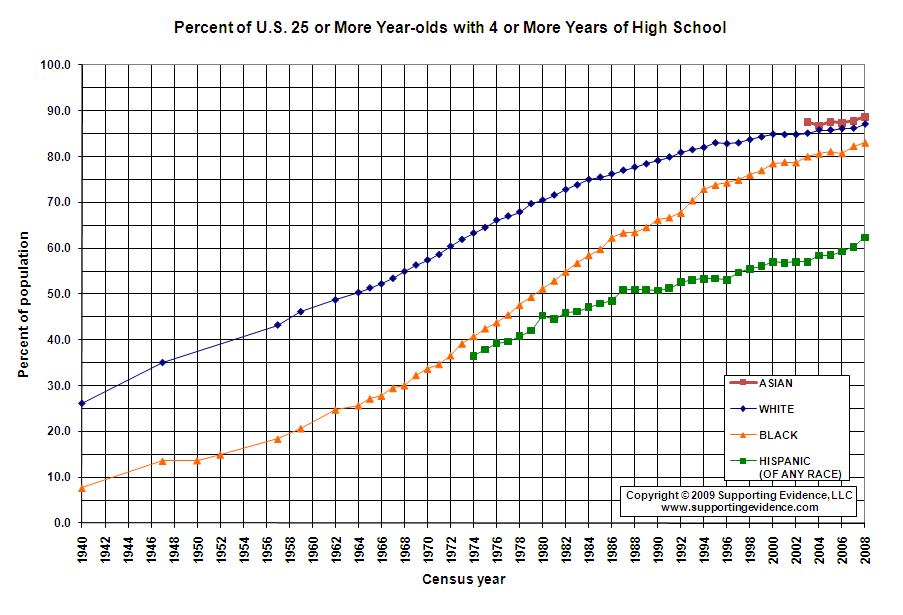 Implications: An increasing majority of White and Black students have attended four or more years of high school, while fewer than 60% of Hispanic students have taken advantage of this opportunity.

Study Description: The United States Census Bureau has conducted a monthly 'Current Population Survey' (CPS) for over 50 years. The CPS interviews 57,000 households monthly, scientifically selected on the basis of area of residence to represent the Nation as a whole, individual States, or other specified areas. The survey checks employment situation, along with demographic status of the population, information such as age, sex, race, marital status, educational attainment, and family structure. Periodically additional questions are included on such important subjects as health, education, income, and previous work experience.

Definitions:
Graduation Rate: In the context of this data, four or more years of high school at age 25 or greater approximates high school graduation. Because some of these adults may not have completed all courses with acceptable grades or passed applicable high school exit examinations, not all may have actually graduated.